Below is a selection of current anthologies, which feature my fantasy and horror short stories and novellas. 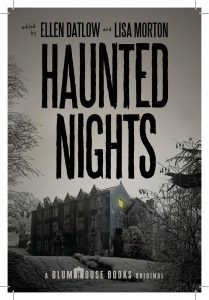 Edited by Ellen Datlow and Lisa Morton, “Haunted Nights” unleashes sixteen never-before-published chilling tales that explore every aspect of our darkest holiday, Halloween. In addition to my original story “All Through the Night,” about a faery crossing paths with a lonely widow in 19th century New York, there are stories about scheming jack-o’-lanterns, vengeful ghosts, otherworldly changelings, disturbingly realistic haunted attractions, masks that cover terrifying faces, murderous urban legends, parties gone bad, cult Halloween movies, and trick or treating in the future,

“As you sit warm and cozy in your chair by the fire, comforted by the pretty lights and decorations of your holy nights, a chill runs up your spine. At this time of the year, many terrors lie just beneath the tinsel. They bring a special kind of fear that can only be found in “Winter Horror Days.” From Omnium Gatherum, this volume features my story “Mother Night,” about an old man who has been kidnapped by faeries.

BONUS: You can hear me read from this story on the Shades & Shadows podcast number 010. This was from a live performance in Los Angeles in January, 2017, which also features the work of David Gerrold and Xach Fromson.

A deluxe edition of original and classic short stories, packed with monsters, vampires and a host of weird creatures. Tales of shadows and voices in the dark from the likes of H.P. Lovecraft, Edgar Allan Poe, Mary Shelley, Bram Stoker, Nathaniel Hawthorne and William Hope Hodgson are cast with previously unpublished stories by some of the best writers of horror today.CHILLING HORROR SHORT STORIES features new and classic authors. My original story “Leonora” is in this book.  You can order your copy here.

Edited by Rosalie Parker, 17 new stories that celebrate the diversity of the fantastic spectrum and attest to Parker’s exceptional taste. This fifth volume of Strange Tales from Tartarus includes my short story “You-Go-Back” about a demon set loose in P.T. Barnum’s American Museum.

KRAMPUSNACHT holds within its pages twelve tales of Krampus triumphant, usurped, befriended, and much more, featuring my story, “The Wicked Child,” and eleven other great holiday tales.

This magical anthology features three works of snowy romance and mystery. Based on Mexican folklore, “The Devil in Midwinter” by Elise Forier Edie, tells the story of a young reporter, caught in a deadly game with a demon; “Taming Fate” by Amalia Dillin, has a woman of mysterious power, almost burned as a witch, saved by a marriage of convenience; and “Opal,” by Kristina Wojtaszek, a re-telling of the Snow White fairytale, transforms an owl into a princess, and puts her on a wintry path to a handsome prince…